Our faculty consists of artists who are highly skilled performers and pedagogues. Our teachers have specialized training in various string pedagogies and especially Suzuki Talent Education. 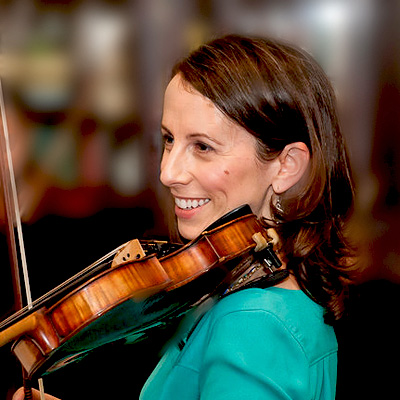 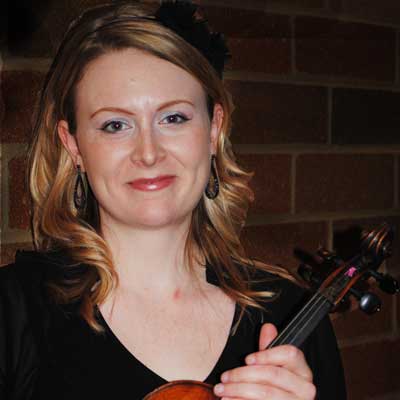 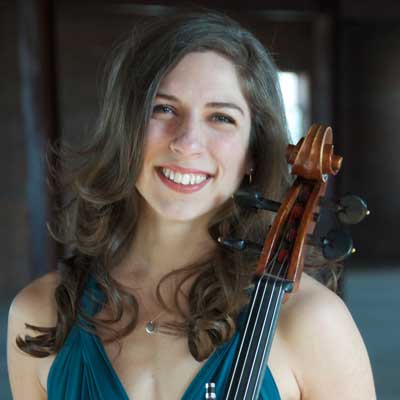 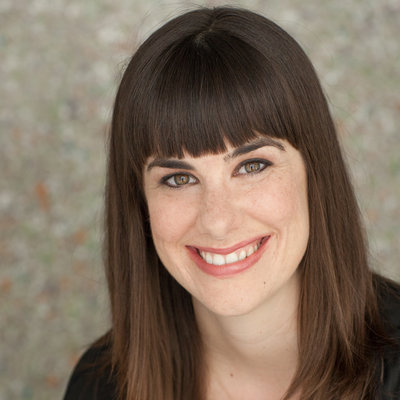 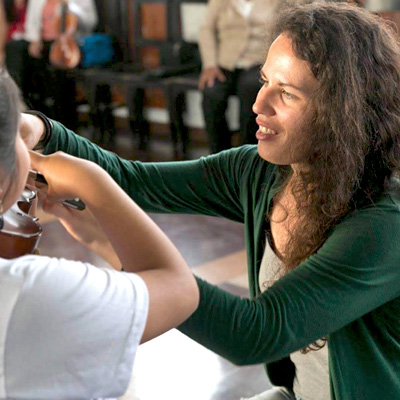 Meg Lanfear is a Suzuki Talent Education specialist and is the founder and Director of the Oak Park String Academy, a Suzuki violin and cello program located in Oak Park, IL. Founded in 2005, OPSA offers expert instruction in violin and cello, along with a full array of musical experiences designed to provide an extraordinary musical education for children ages 3 – 18, preparing students for a lifetime of music making at the highest level, regardless of professional aspirations.

Meg began her musical studies on piano at the age of 3 and then continued on to Suzuki violin lessons at the age of 7. The daughter of a Montessori school director, she comes from a strong background in education. Meg went on to complete her Masters in Violin Performance as well as Suzuki Pedagogy at the Cleveland Institute of Music--one of the nations top conservatories.

While at CIM, Meg taught at the Fairmount Fine Arts Center as well as the Cleveland Music School Settlement. Meg lived in Matsumoto, Japan for two months and studied at the Suzuki Talent Institute with Koji Toyota and performed in several concerts. Several other institutions were of significance in Meg's studies including the Western Springs School of Talent Educationwith Ed Kreitman (where she was on faculty for 10 years), the String Academy at Indiana University with Mimi Zweig and the Suzuki Talent Education Program at Augsberg College in Minnesota with Nancy Lokken.

Meg has studied pedagogy and Suzuki philosophy with some of the most illustrious Suzuki Teacher Trainers in the world, including: Linda Case, Carol Dallinger, Teri Einfeldt, Alice Joy Lewis, Edmund Sprunger, and Tom Wermuth.  She has been profoundly influenced and inspired by her principal mentors Nancy Lokken and Almita Vamos. Meg has also been a past participant in the Juilliard Symposium in New York City--a 3 day conference with some of the most skilled pedagogues in the world, including Paul Kantor, Ida Kavafian, and David Kim.

Her students have consistently won high recognition in many solo competitions and contests, and are often selected to participate in prestigious performing groups including various All-Region Orchestras, all levels of the Chicago Youth Symphony and the Illinois Music Education Association’s All-State Orchestra.  Her students have performed as soloists with orchestra, and have participated and won distinction in area competitions such as the DePaul Young Artists Concerto Competition and the OPRF Symphony Orchestra’s annual Concerto Competition. In addition to having become extraordinary individuals in many diverse fields, her students have been accepted to prestigious universities and music schools such as the New England Conservatory, Northwestern University’s Bienen School of Music, University of Southern California’s Thornton School of Music, University of Illinois Urbana-Champaign and Cornell University in Ithaca, NY.

Meg has won many awards for her scholarship, musicianship, and abilities as both a performer and as a teacher. In 2010, Meg became one of nine teachers who were the very first teachers in the country to earn the Certificate of Achievement from the Suzuki Association of the Americas, an award given to teachers that demonstrate an outstanding commitment to lifelong learning and excellence in their teaching.

As a professional performing musician, Meg has performed around the globe as soloist or orchestral member in some of the world’s most famous halls including, Chicago’s Symphony Hall, Cleveland’s Severance Hall, The Hollywood Bowl and Boston’s Tanglewood. She has also performed with some of the world’s most prestigious musicians including Joshua Bell, Edgar Meyer, Mark O’Connor, Leonard Slatkin, Daniel Barenboim, Joanne Foletta, Diana Krall, and Herbie Hancock. Meg has held principal or section positions with ensembles such as the Elgin Symphony Orchestra, the Illinois Philharmonic, Canton Symphony and the Civic Orchestra of Chicago. Meg performs regularly with the Elgin Symphony Orchestra, which most recently welcomed former Assistant Conductor of the Cleveland Orchestra, Andrew Gramsas Music Director.

This summer, Ms. Lanfear will be on the faculty of the Colorado Suzuki Institute in Beaver Creek and the PhoenixPhest in Ann Arbor, MI with Gabriel Bolkosky.

Elizabeth Huffman is the Assistant Director of the Oak Park String Academy. An experienced private instructor, Elizabeth joined the OPSA faculty in 2012. She has been working with students for over 15 years, blending traditional string pedagogy with the philosophy of Suzuki Talent Education. Past positions include violin instructor at Maine South High School in Park Ridge, IL and violin instructor at Beachwood Middle School in Beachwood, OH. Prior to joining the faculty at OPSA, Elizabeth taught at the Allegro Music Center in Park Ridge, IL building and maintaining their first violin program. During the spring and summer of 2011, Elizabeth taught at the Western Springs School of Talent Education as a visiting private instructor.
Elizabeth has received Suzuki training with some of the most established pedagogues and Suzuki Teacher Trainer’s in the world, including Nancy Lokken, Ed Kreitman, Doris Preucil, Carol Dallinger, Tom Wermuth, and Alice Joy Lewis.
Growing up in Milwaukee, Elizabeth began studying violin in a Suzuki program at the age of 6. She is grateful for the solid foundation she received as a student of Mary Ellen Meyer. She went on to receive a Bachelor of Music in Violin Performance Cum Laude from Western Michigan University, and a Master of Music from the Cleveland Institute of Music. Elizabeth’s principal teachers include Jerome Franke, Renata Artman Knific, Linda Cerone, Stephen Rose, and William Preucil Jr.
Elizabeth is an active professional musician and has performed with multiple artists and orchestras across the country. She has shared the stage with many prestigious artists, including Itzhak Perlman, Midori, Mark O'Connor, Barbra Streisand, Kurt Masur, James Levine, and Seiji Ozawa. Elizabeth has had the opportunity to perform with the Cleveland Orchestra and the Boston Symphony Orchestra while attending some of the nation’s top music festivals including Tanglewood Music Center, Kent/Blossom Music Festival, Round Top Music Festival, Encore School for Strings, The Henry Mancini Institute and the Colorado College Music Institute.
In the past, Elizabeth has performed with the New World Symphony, the Lake Forest Symphony, the Northwest Indiana Symphony Orchestra, the Canton Symphony, the Erie Philharmonic, the West Shore Symphony Orchestra (Concertmaster 2001-2002), and the Kalamazoo Symphony. Elizabeth was a member of the Sarasota Opera Orchestra from 2009-2012 and performed in the Goodman Theater’s revival of Brigadoon in 2014. Recent performances include the Broadway in Chicago production of An American in Paris, ProMusica Chamber Orchestra, Chicago Opera Theater, Chicago Sinfonietta, Concertmaster of the Paderewski Symphony Orchestra and Concertmaster of the Park Ridge Fine Arts Society.
Elizabeth currently performs as Assistant Concertmaster of the Illinois Philharmonic Orchestra, in addition to serving as the personnel manager. She also performs as a member of the violin section of the Elgin Symphony Orchestra and the Milwaukee Ballet Orchestra.

Ms. Huffman is the Assistant Director of the Oak Park String Academy and is currently accepting new students.

Jean Hatmaker is a founding member of the Kontras Quartet, with whom she has performed in chamber series all across the East and Midwest, as well as live performances on NBC and public radio. KQ has a rich history of interdisciplinary collaboration, often collaborating with dancers, visual artists, and musicians of other genres. They tour frequently with nationally-acclaimed bluegrass trio the Kruger Brothers, and have performed together for PBS, Telluride, MerleFest, IBMA, and the Late Show with David Letterman. KQ recently released their first two commercial albums: their first commissioned work, Lucid Dreamer, with the Kruger Brothers, on Double Time Records; and Origins, an album comprised of music from the founding members’ home countries, on MSR Records.

Hatmaker is a passionate teacher, holding faculty positions at Lake Forest College and Elmhurst College, where she also founded the Elmhurst College Cello Choir. With Kontras Quartet, she is in-residence at Western Michigan University as a chamber ensemble coach and performance lecturer. She has been a board member of the Chicago Cello Society since 2014 and currently serves as President. She is also an amateur ballerina and has studied and performed at Indiana University, the NewArt School of Ballet, and the Joffrey Academy of Chicago. Combining her passions for music and dance, Hatmaker has arranged and performed original ballet productions of The Nutcracker and Alice In Wonderland, collaborations between the NewArt School of Ballet and Kontras Quartet.

Hatmaker has an extensive background of orchestral playing, having been principal cellist of the Civic Orchestra of Chicago, Western Piedmont Symphony, and other regional orchestras throughout the Midwest. She received both a Bachelor (with High Distinction) and Master of Music degrees in Cello Performance from Indiana University, in the studios of Helga Winold and Janos Starker. She plays on a French cello made by Marc Laberte ca. 1922, and uses a Hill bow.

In addition to collaborating with students at the Oak Park String Academy, Melissa Zindel is the staff accompanist and coach at the Western Springs School of Talent Education and the Naperville Suzuki School. Melissa earned her Bachelor of Music degree in Keyboard Performance at Southern Illinois University Edwardsville, where she studied with Linda Perry. While at SIUE, she accompanied and toured with the SIUE Suzuki String Development and Tour Group programs. She completed her Master of Music degree in Accompanying and Chamber Music at the Moores School of Music at the University of Houston with Timothy Hester, and received full assistantships in accompanying.

Melissa has worked as a staff accompanist at the American Suzuki Institute at Stevens Point, the Preludio Violin Program at Ithaca College, the University of Houston and Greenbriar Suzuki programs, as well as Opera in the Ozarks, University of Central Arkansas, Hendrix College, and Georgia College and State University. She has also played for the masterclasses of Paul Kantor, Yo Yo Ma, David Perry, Rachel Podger, Marilyn McDonald, Fredell Lack, Norman Fischer and Jeffrey Solow.